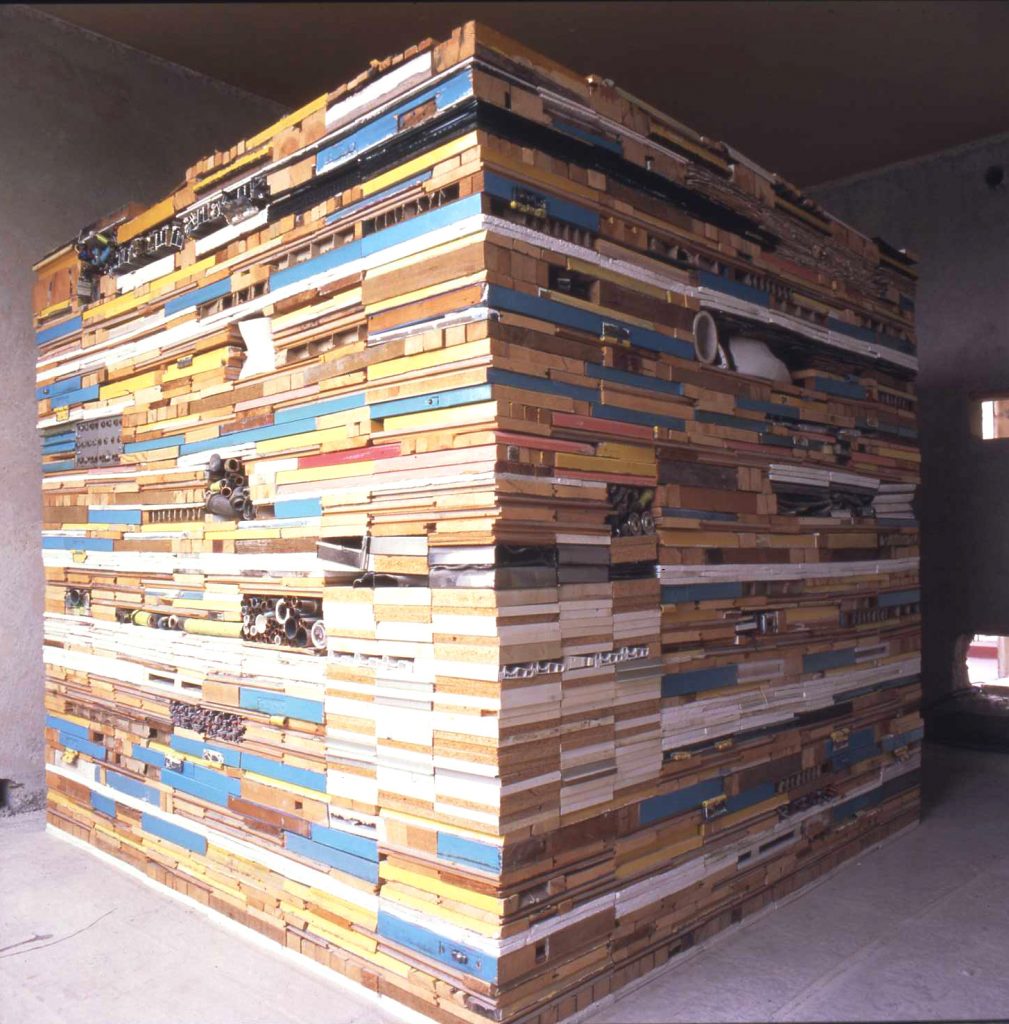 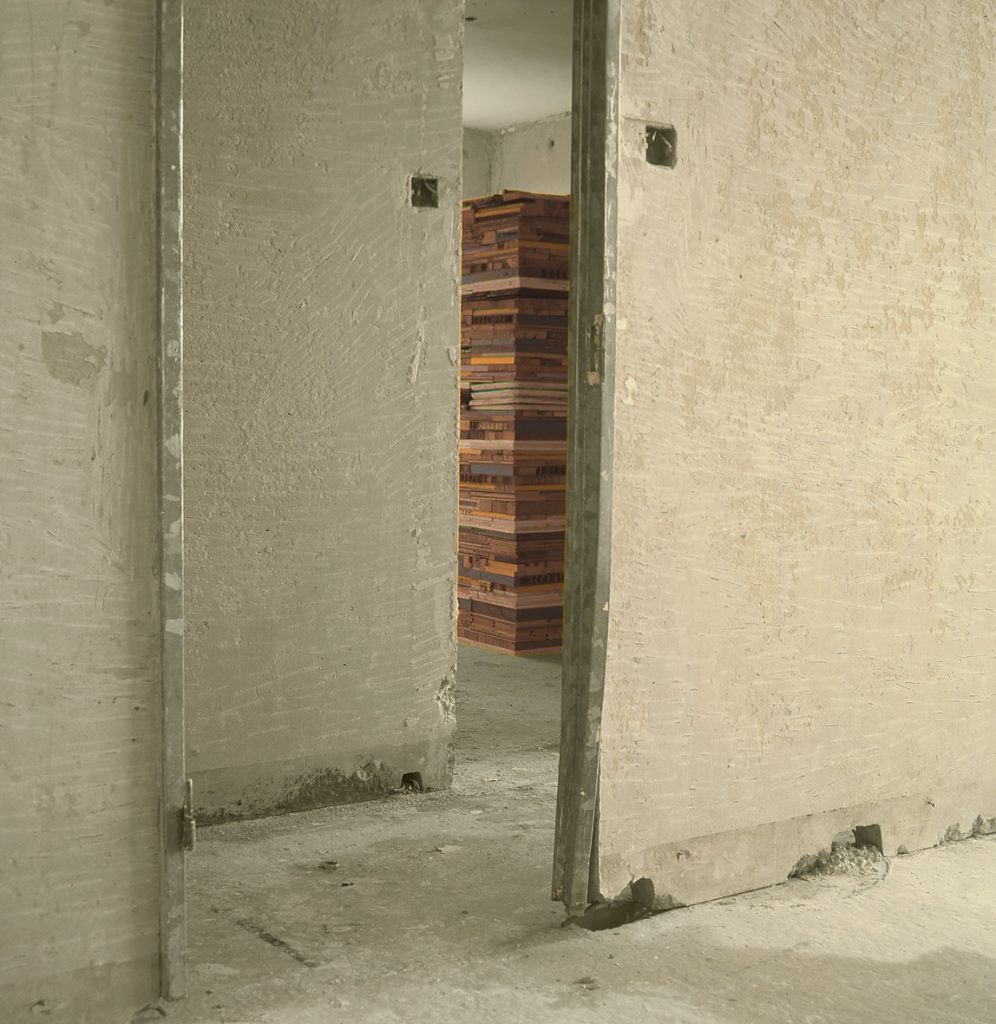 Over the 6 years Neville Gabie ran [with Leo Fitzmaurice] and worked in the flats at Sheil Park, he made several works. Flat was made in the former home of Mrs Hall, resident on the 7th Floor for the previous 30 years. It involved the complete deconstruction of the 3 bedroomed flat, including doors, floors, bathroom, kitchen, all of which were cut and packed to create a solid block of material.The flat was completely stripped back to its concrete construction state.

For further info on the project as a whole, please see below. 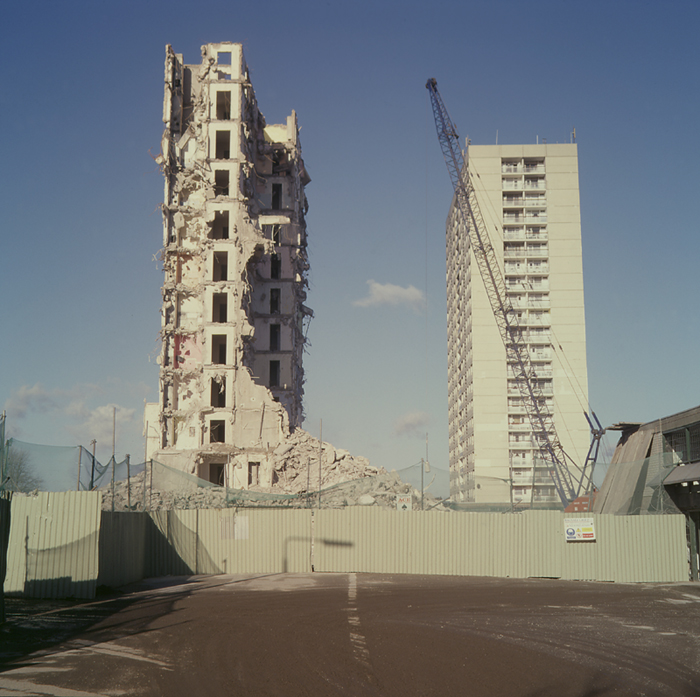 Up in the Air – Sheil Park, Liverpool 1999/2005    Project Background and artists involved

The project had three distinct phases with a publication produced for each phase;

Up in the Air 1999 /2000– Initiated by Neville Gabie whilst MOMART artist in residence at Tate Liverpool, the original concept of the project was developed, managed and curated by Kelly Large, Becky Shaw, Leo Fitzmaurice and Neville Gabie

Further Up in the Air – 2000/04 developed, managed and curated by Leo Fitzmaurice and Neville Gabie

The project took place on the Sheil Park estate, North Liverpool during the process of demolishing three tower blocks. Up in the Air was based in Kenley Close, Further Up in the Air, in Linosa Close, the last of the three buildings to be demolished. Hosted by Liverpool Housing Action Trust, the project had ACE, Lottery, Capital of Culture and LHAT funding.

Setting the scene for Further Up in The Air. Leo Fitzmaurice Neville Gabie

“In 1998 there were something like 70 tower blocks in the Liverpool area. **Current predictions suggest that within 5 years there will be as few as 15 to 20. This visual transformation of the urban landscape might be possible to imagine, but what are the human implications of so radical a change. The 1960’s saw many of the run down centre’s of population in Liverpool, the old Victorian terraces, demolished, to be replaced by tower blocks and making way for ‘new – town’ developments such as Speke and Kirkby on the outskirts of the city. Tower blocks were seen then to be the solution to overcrowding and poor living conditions. The post war optimism imagined new homes for everyone with all the mod cons. Although the motivation might have been laudable, the implications of devastating established communities was not considered and the consequences are still evident. The new – towns have taken years to establish themselves, to rebuild social structures and the population of the city itself has shrunk by half leaving whole areas derelict and unsustainable.

Forty years on, the same city-wide process of regeneration has begun again, and this time it is the tower blocks that have become a byword for all that is bad. Signs of their poor state of repair are easy to see, but what of the people who live in them? The majority of the residents of Sheil Park are retired, many of them having lived in the buildings since they were first commissioned. What are the implications of such a traumatic move at this stage of life? The whole issue of an aging inner-city population and how best to involve them in a dialogue is not unique to Sheil Park. It is a typical aspect of the more general problems facing some of these inner city areas. Located in North Liverpool, a historically working class community, the blocks have only been half occupied in recent years. With their demolition the same population can now be housed in ground level accommodation on the same site. What remains unanswered is just how to revitalise these area’s long-term future.”      Neville Gabie Up In The Air Publication

Work is now well underway to demolish Kenley close leaving Linosa Close to be Liverpool’s highest build, a solitary beacon in this part of the city. What unfolds now, with the imminent demolition of Linosa is the final phase of Sheil Parks high rise history. For many residents it marks the end of more than three decades of high-rise living. Its demolition, in some way, not only represents the erasure of memories but also the physical spaces where people have lived.

“As I roamed from floor to floor I became preoccupied with memory as I moved between unlit corridors and rooms containing suitcases, umbrellas, cutlery and discarded toys and clothes. Memory that was not of the quasi-factual kind as in the elephant account, but memory as triggered by the way that objects were left, often placed as if the integrity of domestic display should remain intact whatever. Flats that had not been ‘interfered’ with were compelling in ways that were different to artist interventions, an acute sense of intrusion was felt as I entered the rooms but it was accompanied by a voyeuristic hunger to see what was left behind. It was like sorting through the personal effects of a dead relative. On the twenty-second floor I encountered a printed mural of grand (kitsch) proportions depicting a woodland scene in the living room. The format was accompanied by a much smaller vista of a tropical beach in the kitchen. The quintessentially pastoral scene contrasted with the exotic, against which everyday objects competed for attention, heightening a sense of geographic and cultural difference.”     Russell Roberts Up In The Air Publication