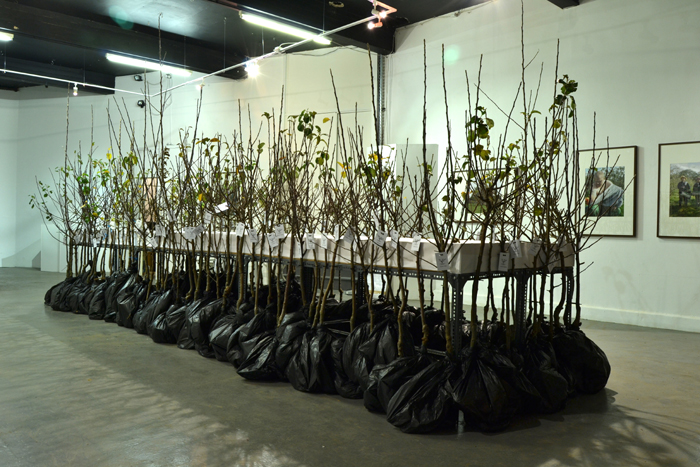 Orchard – Commissioned by the Contemporary Art Society, curated by Jennie Syson and working in partnership with Patel-Taylor Architects and Nottingham City Council- 2009/2011

Neville Gabie was commissioned to work with architects Patel-Taylor on the redesign of Sneinton Market, an historic fruit and veg market close to the city centre. Although much of the redesign, including text based works, seating and stone finishes was ultimately cut for cost reasons a significant part of the thinking involved the replanting of the square with apple trees.

In addition to changes in the physical landscape, Neville Gabie developed a wider community project – The Apple Adoption Network. Working with Brogdale Nursery, Kent, 100 apple trees of different varieties were put up for addoption by anyone living within a close proximity to Sneinton Market Square. Trees could be adopted to plant in your own garden, allotment, or on public land as long as you agreed to nurture and maintain it. Projections of fruit trees were also on display during the launch of the new square marking it’s historic significance as the centre of distribution of the Bramley apple.

Neville Gabie also worked with curator Jennie Syson to develop a programme of works by two other artists, a photographer and a writer which was exhibited as part of Orchard. Please see the Orchard Launch and Symposium page.