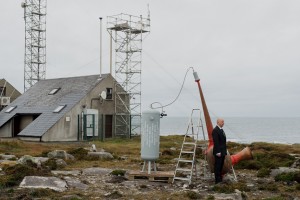 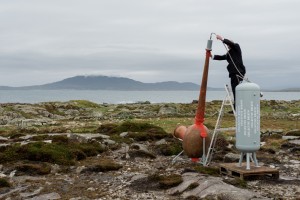 ‘the breath of one thousand, one hundred and eleven people collected together and released to play a single note for 49 minutes.’

Introduction to the WOMAD commission – curated by Jeni Walwin, produced by Tammy Bedford

The Collective Breath project is part of Experiments in Black and White a new work commissioned from the artist Neville Gabie for the 2014 WOMAD Festival in Charlton Park, Wiltshire. This work is an exploration of four materials – ice, chalk, oil and air –   fundamental aspects of the natural world that are variously contested and debated as we look to the future of the planet.  During the festival the project comprised a daily performance-drawing with a huge chalk boulder; outdoor screenings of five films featuring the artist working with each of ice, chalk and oil, in arduous, physical performances; and the Collective Breath tent where breath from festival-goers was collected and speakers from a variety of disciplines gave talks on the subject of breath and air as they relate to science, art, the voice, musical performance, life cycles and eastern meditation. Breath is a fundamental part of musical expression and connects here to the main focus of the WOMAD festival on the music stages.

Inspired by his recent residency at the Cabot Institute University of Bristol, Neville devised a system for collecting breath from over one thousand visitors during the 4-day festival.  The breath from each bespoke bag has now been transferred into a pressurized container.  Contributors to the project have made suggestions for the site to release the breath and record the sound as it plays through the specially made instrument.  Postcards with a photographic record of the event and a link to the film of the Collected Breath release will be posted to all contributors.

‘every one of the 1111 people was invited to fill an individual bag of breath, which was later transferred into a single pressurized tank.’

‘Each contributor was invited to suggest where Collective Breath ought to be released. Mace Head, Ireland was one on of those suggestions.’ 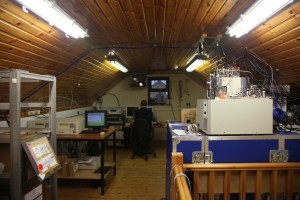 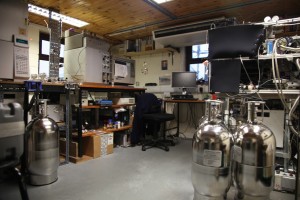 Located on the west coast of Ireland, the Mace Head Atmospheric Research Station has been a site for aerosol measurements since 1958. The location is unique in Europe, offering westerly exposure to the North Atlantic Ocean and the opportunity to study atmospheric composition under Northern Hemispheric background conditions as well as European continental emissions when the winds favour transport from that region.

Research themes at the Institute include Air Quality, Atmospheric Composition, Climate Change, Atmosphere-Ocean Exchange and Climate-Ecosystem Interactions.  The Institute is the responsibility of the School of Physics and the Ryan Institute at the National University of Ireland, Galway.  It is managed on a daily basis by researcher Gerry Spain.

September 2014 marked the 25th UN International Day for the Preservation of the Ozone Layer commemorating the date of the signing of the Montreal Protocol which brought about a global initiative to ban Ozone Depleting Substances.  The Mace Head Research Station has played a significant role in assessing the planet’s success in saving the ozone layer. The data collected at Mace Head is unique in Europe as it represents observations in the continent’s cleanest air and demonstrates a gradually recovering ozone layer over the last ten years.

Setting up at Mace Head 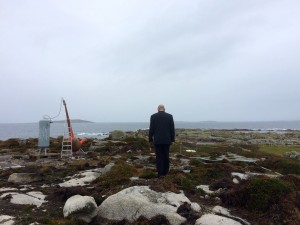 ‘The breath of one thousand, one hundred and eleven people sounded out over the Atlantic.’

Arrival in Connemara – On 29 October 2014, artist Neville Gabie, cameraman Stuart Ward, producer Tammy Bedford and curator Jeni Walwin arrive in Carna, County Galway to film and record the release of the breath of 1,111 people.  The pressurized container into which all the breath has been transferred and the huge, sculpted, wood instrument have been carefully transported from the artist’s studio in Gloucestershire to this remote location on the western edge of Europe.  The site was nominated by Anita, one of the WOMAD visitors who gave their breath at the Collective Breath Tent during the 2014 Charlton Park Festival.  The Mace Head Research Station is an appropriate place for the completion of this project in that it is described as the site where the cleanest air in Europe can be breathed.

30 October 2014 : Filming the Sound – A heron greets us on a bend in the grass-covered track that leads to Mace Head. Low level dwellings are scattered along the coastline to the north.  Some are brightly painted, perhaps holiday cottages, others look more sombre, in touch with the landscape, reflecting the gentle patterns of the boulders around them.  Occasional glimpses of the peaks beyond.  We are slipping down a steep, rough slope, as if into the ocean below, and there perched precariously on slim rocks at the edge of the world is the Mace Head facility. One older granite building at the cattle grid entrance and two tiny substations mark the edge of the land.  Inside are dials, canisters, computers, files, leads, screens, temperature control, music, Gerry Spain (responsible for the day to day running of the Station) and, very occasionally, visiting researchers.  Two huge mast heads securely held by metal guy ropes support an array of cups, aerials, satellite discs and saucers relaying information to the substations at the foot of the masts.  The data is shared with collaborating institutions around the globe, including among them the University of Bristol’s atmospheric chemists who are monitoring air quality and pollutants and with whom Neville had undertaken a recent residency.

Clouds are lifting and dipping over the hills to the west.  A necklace of grey mist lingers around the mountain across the water ahead of us. As we prepare the site the rain is gusting and swirling around us.  The three microphones are fixed to tripods and held steady by rocks collected nearby.  The camera takes up its position. The lenses are wiped dry with a scarf.  The hugely heavy pressurized container stands proud on its rock-weighted plinth. There is a moment of stillness.  The beautifully carved instrument looks quite at home in this landscape – the bright russet hues of its tall neck echoed in the autumnal colours of the abundant bracken.  With its wide funnel pointing out to sea it seems to nestle happily amid the boulders whose granite surface is softened by the covering of heather, lichen, gorse and sea grasses.  We are all here.  We are ready.  We face west from the most westerly tip of this Connemara peninsular. I have been given my first job as a minor sound technician.  I am in charge of sound battery levels.  I avoid the prickly gorse and settle into position with a clear view of the dials protected from the elements inside a sawn-off plastic water container.  Gerry, the Mace Head researcher and keeper of the site, stands with us for the release.

Dressed in a smart black evening suit the artist climbs up to undo the valve that finally unleashes the air into the instrument.  A deep low sound emerges.  The artist stands to attention, the conductor of a found symphony.  For fifty minutes the camera rolls, collecting the occasional bright song of a bird, the rustle of the wind, and the swish of the sea against the backdrop of over one thousand breaths now given strong, clear, sonic dimension. Starlings circle and dance as we finish.  A peewit sings.  The rain abates briefly.  Still photographs are captured.  It’s time to dismantle the instrument.  Prickly gorse spikes the cameraman.  Is this the ground’s resistance to human intervention in this remote spot?      Jeni Walwin     October 2014

During the festival Neville Gabie screened several films and did a daily performance work using a boulder of chalk.  The films included work from Antarctica, South Africa and his studio. Two films using crude oil and chalk were triggered by a swing that operated between the two screens, whilst three other longer works were shown all day in the arboretum.  The daily performance work involved creating a linear drawing on the spine road through the arboretum by continuously dragging a large boulder of chalk with the help of festival goers.

A  PROGRAMME OF TALKS 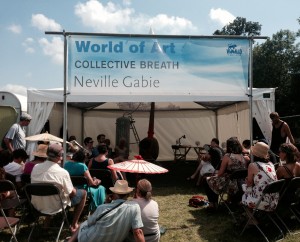 In addition to these works, each day there were a series of talks by scientists, musicians and artists exploring the subject of air, breath and breathing. 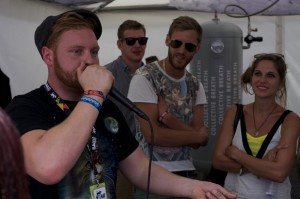 All work commissioned by Jeni Walwin, Tammy Bedford on behalf of WOMAD