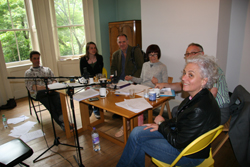 The Greatest Distance is a self funded project developed after completing the residency on the Olympic Park during construction. It was developed in response the the numerous opinions about the forthcoming Olympic Games and it’s perceived impact on London. Neville invited anyone to write a suggestion as to where the furthest place away from the opening ceremony would be. Based on those suggestions a panel was set up to chose where Neville should go. The panel made up of; David Lillington, critic, Sarah Butler, author, Bill Drummond, artist, Danielle Arnaud, gallery director, Jason Wood, sports historian and archaeologist, Sam Wilkinson, arts consultant, selected a journey to Paris and a visit to see what had happened to the site of their failed bid.

The resulting film and a publication including the full texts of the 100 suggestions was exhibited at Danielle Arnaud Gallery, London