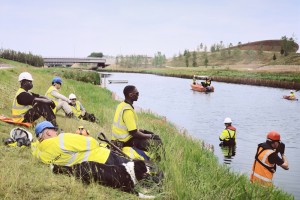 Stades; Past and Future. Olympic Museum, Laussane, Switzerland 13th October 2016 – 7th May 2017 Neville Gabie’s work as artist in residence for the Olympic Delivery Authority during the construction of the Olympic Park in Stratford, London has been included in this survey exhibition of the building of Olympic venues. In addition to the exhibition, which includes a catalogue, the work Freeze Frame, made by Neville Gabie on the Olympic Park and based on Seurat’s Bathers at Asnieres has been purchased for the Olympic Museum Collection.