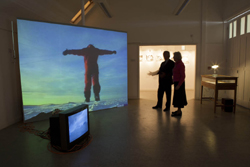 Neville Gabie and Joan Gabie were commissioned by the Cheltenham Museum and Art Gallery, funded by New Expressions 2 to make a new work in response to the archive collection of Antarctic Explorer Edward Wilson. In response they completed a project begun whilst Neville was in Antarctica. During his time there he sent a daily email describing his experience. In response Joan did a daily drawing. The work as a whole considers the challenges of communicating over such long distances using contemporary technology. As a comparison their work is book-ended with a letter written by Edward Wilson as he lay dying in Antarctica, with a telegram written by his wife Ory from New Zealand to family back in the UK. The letter and telegram were written three months apart when Edward was already dead and Ory was still under the illusion that all was fine.